This was our 3rd trip to Annecy and second time racing after last years Trail World Championships. The 86k ultra was too much to do so soon after the Highland Fling so I opted for the marathon, but in case that wasn’t enough, fancied the short vertical race 2 days earlier! The VR was the reverse of the final descent from the ultra and the marathon was due to be run on the last half of the ultra course, so we knew what spectacular trails and views to expect. I was really looking forward to getting back into the mountains with the several mile long climbs!

We were set off in 10 second intervals, determined by your race number. As I had raced last year, I’m assuming they went by that result when I was 6th to start, that put pressure on right from the get go. I felt I had to justify being at the front, but also didn’t want too many guys overtaking me! I set off running what would have been a walk in a UK fell race, but at only 4k you can push it, right? I didn’t really think about how long it would take, and pushing it for 40 plus minutes wasn’t feasible! I let a few over take me, and did the sensible thing and walked the switch backs through the woods. Before long the temperature had dropped to a more comfortable running level and there were runable sections, interspersed with rocky climbs. I was loving the variety of terrain, but willing the top to come, still not in sight. There was a great final scramble then I was told only 400m to go, phew, this had been a tough 43 mins. The last 400m were rolling through the woods, then finally, that view, all worth it for the view over Lake Annecy and for miles around. 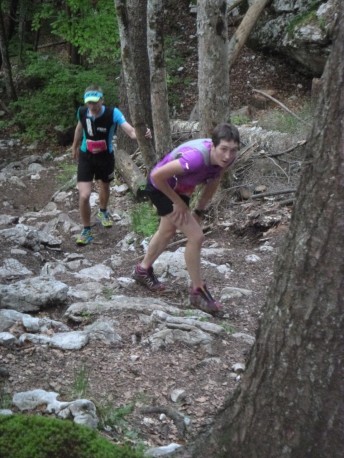 Last climb on the VR. 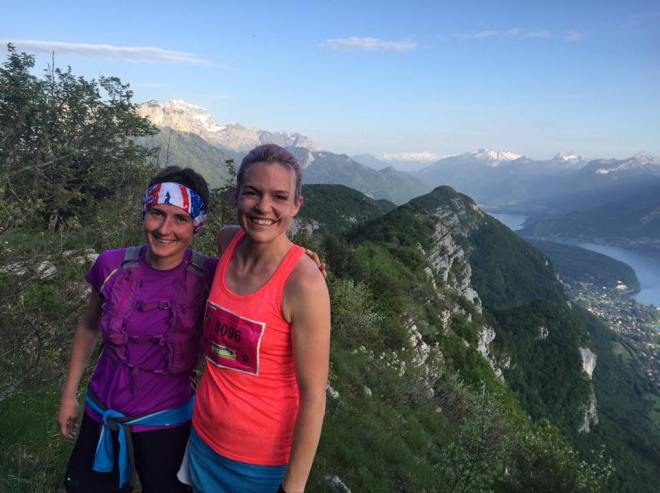 Myself and Sophie at the top of the Vertical Race.

With the forecast thunder, lightening and torrential rain for Sunday lunchtime the organisers had to make the difficult decision, the most exposed parts of the marathon course were avoided. Instead the lower level route was all marked out, we were now set for just under marathon distance but there was still over 2000m ascent.

The start at Doussard was familiar as the second checkpoint from last years Maxi race, we were sticking with the original route up to Col de la Forclaz. We had been given elite numbers so started in the first pen. I was happy with this, close enough to the front to avoid congestion with over 1300 in the race, I was less happy when the photographer asked myself and 2 other ladies to come to the front row for photos. So there we were, unable to hide, right on the front row as the 3 favorite women next to the predicted top 3 guys. This was a little unnerving as I knew the start would be fast as the approach to the first climb was the only flat part of the race. So, the countdown started and we were off, and it was fast and frantic, but luckily wide enough so we didn’t get caught in a stampede! I was a little surprised to to clock just over 6 mins for the first mile, especially given the twists and turns through the houses before hitting the trail. After a 7.38 second mile, the tone was then set for the race though, the climbs got going and the next couple of miles were 15+ mins. I was in 3rd position in the women’s race but had already noted how strong and powerful the two women ahead looked, they soon climbed out of sight and the next time I saw them was at the finish. The top of the climb is what European races are all about, the atmosphere was fantastic with cow bells being rung by very enthusiastic supporters lining either side of the narrow trail. You couldn’t help but look up and smile.

The next section surprised me, I’m not known for my descending but on these wide long descents I was able to hold my own. From the top of the climb we dropped for a mile, firstly on road then through wide grassy fields, even crossing a couple of streams, and not one person over took me! The next two miles were lovely scenic rolling hills crossing streams up to the highest point of the course at 1400m at Chalet De L’Aulp. This is where we split, going left on the bad weather course instead of continuing to climb. The descent was getting muddier by the minute, through the woods but there were some nice switchbacks to break the momentum. Next we had 3 or 4 boring miles along Land Rover tracks but they at least passed quickly as I was hitting 7 min miles!

As I came into the check point at Menthon St Bernard the drizzle started, not enough to bother with my jacket though. I filled up my bottles and made a quick exit, still in 3rd place. Soon after leaving here, the bad weather course was justified as the heavens opened, I’m glad I soon stopped to put my jacket on as the rain for the next hour or so was pretty relentless. This made for good fun conditions over the next few miles, slipping and sliding through the woody trails, I was jealous of those with poles using them to stay upright! We were back on the original course now and this section had been the best part of my race last year as well. I enjoyed these 4 miles climbing up to Col des Contrabandiers and overtook about 8 people, relishing the Peak District, Brown Knoll like conditions! The last descent wasn’t so good, but everyone was struggling with their footing. Never mind the rain, the mud had been churned up by Friday’s VR and Saturday’s Maxi Race, making for a slow, careful last downhill, still only 1 person overtook me so I wasn’t doing too bad. As I hit the road crossing for the last mile along the lake side I still had some running left in me, just about running a sub 10 min last mile. If we hadn’t run enough hills already, there was a final ramp to run up to the finish line! The rain had eased, but I was drenched and cold, a dip in Lake Annecy wasn’t appealing, the food tent, however was, with selections of  pasta, bread, cheese, meats, nuts, dried fruits, dark chocolate and crisps!

So, not as sunny and picturesque as the Maxi Race last year, or the Vertical Race on Friday, but my 45th place finish rates as one of my best yet, and the Patisseries selling the almond croissants were as good as ever!

Many thanks to Montane for the gear, Beta Climbing for the Injinji socks and BetterYou.